Take a Look at That Painting!

It began last year with a ramble through Pinterest. I was looking for some fresh inspiration (because I paint), and I had written something like “nice paintings” in the search bar. You never know.

Among the results was “Beached” by Dennis Miller Bunker. Hadn’t ever heard of him.
But I liked the painting very much. That is, I was taken immediately with the drama of the subject, the artist’s craftsmanship, and the unusual hues and tones. I also found it moving. I wished I’d painted it. 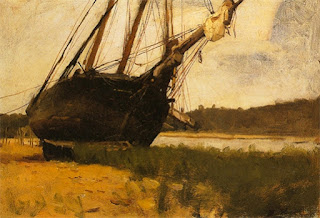 Let’s talk about that drama for a minute. What do we see here? A two-masted wooden ship sits on dry land beside a stream running through a salt marsh. It lists awkwardly on its keel. The ocean is nearby, but out of reach. The ship is stranded, a fish out of water. Our viewpoint is to its right and below it. The bowsprit lurches forward and upward out of sight; likewise, the masts and rigging reach up and out of the picture frame. The ship could almost be charging forward through the waves, aiming right past us; the foreshortening makes that happen. Instead, it is stuck in the sand. Before it stretches a patch of dune grass that it will never sail through.

There’s that foreboding sense of arrested motion. Why is the ship here? Maybe it washed up on the beach during a storm. Its rigging appears to be in place, though worse for wear overall.  We see that the sails are gone, except for a scrap of canvas wound around the bowsprit, and something’s amiss with the boom hanging over the port side. She’s an old boat then, a broad-beamed boat, a working boat. A fishing boat, maybe, or a small freighter. There’s no person depicted, no bystander or sightseer or artist’s friend, which would have given it scale.

In this view of the painting, which dates from 1881 or ’82, sepia hues predominate. The effect can seem elegiac, to us in the present time, because old photographs, often sepia-colored, tend to depict objects, places, and people that have passed away. The scene may strike us as antique. But in Bunker’s time, sailboats were common workhorses of everyday commerce, and a beached one might have been a fairly ordinary sight. What’s uncommon is the way he rendered it.

So now’s the time to say that there is another view to be had of this painting. That’s the way things turn out sometimes, when you’re doing all of your research online. Here it is: 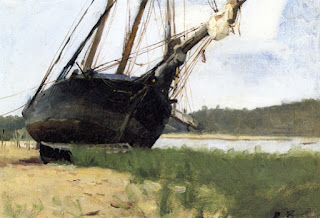 Both images have the same brushwork, so they appear to be the same painting. This version has more realistic daylight hues. Which is the real one? I prefer the painting I saw first, the sepia one, because I was accustomed to it and, until recently, I didn’t know there was any other. Besides, with its somber, shadowy cast, the sepia version looks more haunted, and less like some cool find on a pleasant beach day.

In the second version, it is easier to spot critical details. The hull has an irregular hole and is missing sheathing below the waterline on the starboard side. So it’s apparent that this ship will never sail again, and now awaits the scrappers, the looters, and the pounding waves of storms to come. In the sky, one of the cloud forms has oddly straight edges, evoking the vanished sails.

There’s one detail I can’t identify in either version. What is that curved gray articulated business along the base of the hull? There’s something troubling about it. Is it part of the boat or is the boat resting on it? It doesn’t seem to belong, yet there it is. It seems to be a fabrication of some sort that is marine in nature, but it also calls to mind a human spine.

Notes: the brushwork is quick, and, except in the rendering of the ship, no more than it needs to be. I imagine Bunker seated on a folding chair in the sand, under a broad-brimmed sun hat, making his oil sketch and several pencil roughs of the rigging and other details, on loose sheets of paper that keep blowing around in the breeze, before packing up and hoofing it back to the village to catch a train home to the city, where he’ll finish the piece. (At the risk of spoiling the experience, I did do some reading about “Beached.” The location is almost certainly somewhere on Long Island, in New York. Bunker painted the picture when he was 21 or 22. Of great promise as an artist, he would die of meningitis at 29.)

The daylight version resembles other nautical pictures by Bunker, so I guess it’s the “real” one. The greens function better in this view: the darker hues of the uplands beyond the distant shore, and the paler hues of the dune grass in the foreground. In the sepia version, the greens are all muddied. I suppose that someone took a photo of the painting years ago when it needed a good cleaning, and that image survived to enjoy a life of its own online. Either that, or someone obtained a photo of the daylight version and gave it sepia hues in PhotoShop, just because you can. I still prefer the sepia version, though: the sickly yellow sky, the drab dune grass, the dark, slightly menacing, thoroughly tragic hulk of the ship, none of it offering viewers the least comfort.
Posted by David Bastille at 7:28 AM